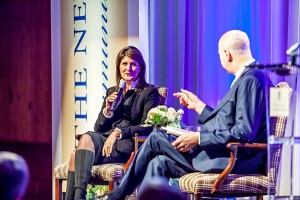 Since its inception, the Foundation has awarded over $13 million in grants to advance lifelong learning, the arts, health and wellness and environmental sustainability. These grants are made possible through the support of generous donors and sponsors who contribute annually through Remarkable Evening or who have established endowment funds at the Foundation. Contributions have also helped make possible transformational projects like the New Albany Branch Library, the Jeanne B. McCoy Community Center for the Arts, the Philip Heit Center for Healthy New Albany and the highly anticipated Charleen & Charles Hinson Amphitheater. 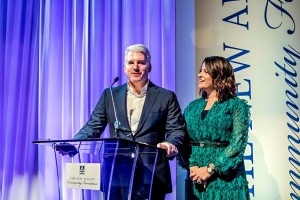 This year’s McCoy Award honorees, Melanie and Michael DeAscentis, Jr., exemplify the values modeled by the McCoys by leading and contributing in ways both public and private. Melanie and Michael DeAscentis, Jr. began their lives in New Albany when their three children were young. From the beginning, their family has supported the success of many New Albany institutions, including the New Albany Branch Library, the Church of the Resurrection, The Jeanne B. McCoy Community Center for the Arts and The New Albany Community Foundation.

Melanie and Michael are also actively engaged throughout central Ohio in a variety of organizations that improve lives by providing supportive services to those in need, including Flying Horse Farms, Pelotonia, Ronald McDonald House, The Center for Family Safety and Healing, The Ohio State University Comprehensive Cancer Center – Arthur G. James Cancer Hospital and Richard J. Solove Research Institute and many more.

Reflecting on Michael’s leadership, fellow trustee Jack Kessler said, “Michael was a transformative leader for the Foundation as its board chair. He’s a strategic thinker and they’re an extraordinarily generous family. Most people will never know how profoundly they have impacted our community because they don’t seek attention, but they have been wonderful to our community.” 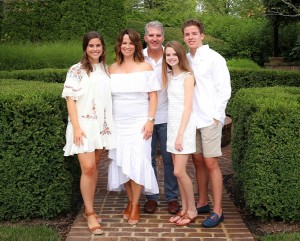 Melanie and Michael DeAscentis with their children, Madelyn, Mike and Mara

In accepting the award, Michael DeAscentis, Jr., said, “I’ve learned a lot over the years about how to build a community from the team that is here tonight that really built the foundation. Melanie and I are just so fortunate to raise our kids here in New Albany.”

Recipients of The McCoy Award include: 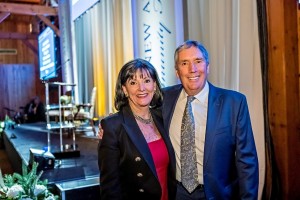 Major Gift announcement made to support the Rose Run Corridor:
The evening included the announcement of a $500,000 contribution from the family of Sandy Raines and Ron Cadieux to support the Rose Run Park/Corridor. Over twenty years ago, the Raines and Cadieux families merged and made New Albany their home. Their family prioritized being actively engaged in the community and takes pride in being a part of the continued development of New Albany.

This gift continues a tradition of giving back to the community by the Raines/Cadieux family. Sandy and Ron pointed to a very personal family emergency during which the New Albany community responded with extraordinary warmth, care and support. Their daughter Laura was in an accident in an elevator. “This caring community wrapped our family up with love and kindness,” said Sandy Raines. “It was more than we could ever have imagined. We believe life doesn’t happen to you; it happens for you – experiencing this hardship while receiving the outpouring of support truly emphasized this sentiment.” Raines Crossing is envisioned to be a place where families can connect, play and enjoy, and is a gesture of gratitude for a community that showed up when the Raines and Cadieux family needed it most. 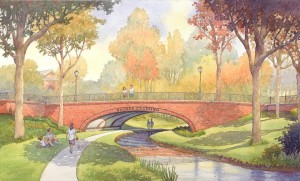 The addition of Raines Crossing will be a wonderful civic asset that brings people together; and improves safety for school children who are crossing between the school campus and the town center.

Three New Albany High School students who attended The Jefferson Series season opener participated in the Remarkable Evening program. Seniors Abdul-Azeez Ahmad, Lydia Artz and Bilan Yakoub welcomed Ambassador Haley and shared with the audience how exposure to these esteemed leaders impacted each of them.

The panel discussion hosted a sold-out audience and included reflections from Albright and Powell on their time as advisors to multiple administrations on matters of national security and diplomacy, as well as what gives them hope for the country’s future.

The evening was later featured on CNN’s Fareed Zakaria GPS, which placed New Albany in the international spotlight, broadcasted all over the world on Sunday, October 6, 2019.

On January 28, The New Albany Community Foundation will host Former Senior Advisor to President Obama, Valerie Jarrett and Former Speaker of the U.S. House of Representatives, Newt Gingrich for the second annual program from the New Albany Center for Civil Discourse and Debate.

The remaining Jefferson Series lectures are as follows: 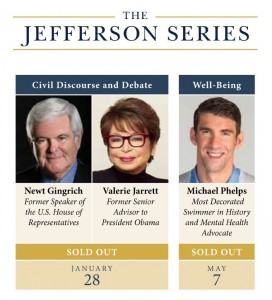 *All remaining Jefferson Series forums are now sold out but guests can be added to the waitlist. Those on the waitlist will be contacted in the order received when tickets become available.

The New Albany Community Foundation and its donors are working together to build an extraordinary community. The Foundation develops collaborative partnerships and invests in transformational projects that benefit all residents and contribute to the greater good: developing a community of lifelong learning, the arts, health and wellness and environmental sustainability. By championing forward-thinking initiatives, the Foundation and its donors have already had a significant positive impact.