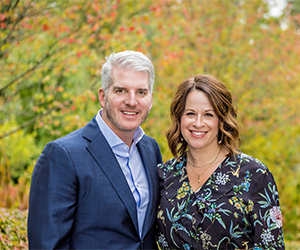 When The McCoy Community Service Award was established in 2004 by The New Albany Community Foundation in honor of Jeanne and John G. McCoy, the intention was to recognize those who pay it forward through their philanthropy, volunteerism and leadership. New Albany is fortunate to have families and individuals who devote their time, talent and treasure to the community, setting an example much in the same manner that Jeanne and John McCoy did throughout their lives. As a result of this leadership, New Albany continues to evolve as a place that values informed, engaged citizenry, culture and the arts, healthful living and a sustainable environment for this and future generations.

When former British Prime Minister Tony Blair visited New Albany in 2013 he shared his observations about our community. Blair stated, “I think the greatest philanthropy for any community always has at its core a focus on the future. It builds for progress. And it’s motivated by the aspiration of the community to do better and to be better; and it’s driven usually by the spirit of present possibility and future hope. And The New Albany Community Foundation represents that focus, and drive and spirit as well as any organization there is. So when I look at the range of activities; education, and the arts and cultural wellbeing, the environment; I mean this is what will decide the future for this community and that future seems to be pretty bright.

This year’s McCoy Award honorees exemplify that focus on the future by leading and contributing in ways both public and private. Melanie and Michael DeAscentis, Jr. began their lives in New Albany when their three children were young. From the beginning their family has supported the success of many New Albany institutions including the New Albany Branch Library, the Church of the Resurrection, The Jeanne B. McCoy Community Center for the Arts and The New Albany Community Foundation. If not for their community leadership, New Albany might not have had a single school campus and high school. The family, which owns Lifestyle Communities, passed on a lucrative development opportunity in the school district that likely would have required a second high school. Without attention or fanfare, they placed the community’s interests above their own.

Michael served on the board of The New Albany Community Foundation from 2006 to 2014. As board chair in 2014, Michael led the organization through a period of significant growth and impact, including the launch of The Jefferson Series, which is widely considered to be one of the premier lecture series in America.

Melanie and Michael are actively engaged throughout central Ohio in a variety of organizations that improve lives by providing supportive services to those in need. One of the first events they hosted after moving into their New Albany home was a benefit for several hundred people that generated support for The Homeless Families Foundation, at the time it was central Ohio’s only family-focused shelter.

The family has also been significant supporters of the Catholic Diocese of Columbus, Flying Horse Farms, Pelotonia, Ronald McDonald House, The Salvation Army, The Center for Family Safety and Healing, The Ohio State University, The Ohio State University Comprehensive Cancer Center – Arthur G. James Cancer Hospital and Richard J. Solove Research Institute, United Way, the Columbus Metropolitan Library, where Melanie serves as a member of the board of the library foundation, and I Know I Can, where Melanie also serves on the board.

Reflecting on Michael’s work with the Foundation, fellow trustee Jack Kessler stated, “Michael was a transformative leader for the Foundation as its board chair. He’s a strategic thinker and they’re an extraordinarily generous family. Most people will never know how profoundly they have impacted our community because they don’t seek attention, but they have been wonderful to our community.”

“Mike and Melanie embody the spirit of this award and I’m so pleased we are able to recognize them for all they do,” said Craig Mohre, President of the Foundation.