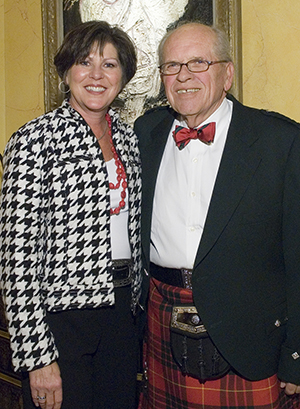 As a strong leader, mentor and friend, Plain Township Trustee and Scotsman Donald Cameron was an institution in the community. Cameron could often be found at Starbucks, the Rusty Bucket, a school athletic event or the New Albany County Club conversing about the local happenings with friends and neighbors. Cameron’s public service career began in 1999 when he was elected by a landslide as a Plain Township Trustee. He was a strong advocate for the Plain Township Fire Department and played a key role in its transition from a volunteer to a full-time, highly regarded, professional department. He worked tirelessly toward the establishment of a 1,000-acre Metro Park in the community, serving as the township’s lead negotiator. And he was a key leader in the effort to build the Jeanne B. McCoy Community Center for the Arts. Cameron wanted all residents, especially the students, to have access to educational and cultural programming on an ongoing basis at the center. Toward that end, the “Clan Cameron Fund” was established to support scholarships for graduating New Albany High School students and to support educational and cultural programming at the Jeanne B. McCoy Community Center for the Arts. Cameron’s “larger than life” presence in the community allowed him to bring together broad and diverse groups for the common good.