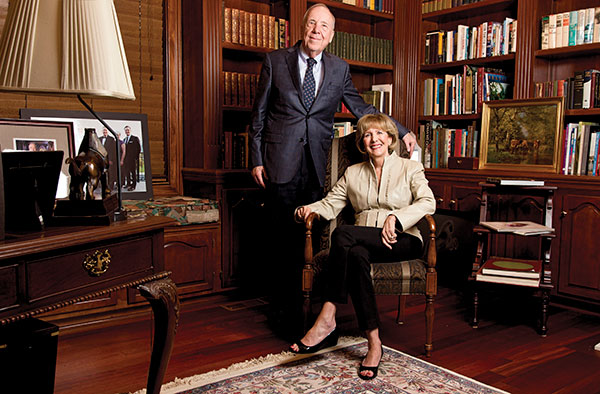 When Al and Barbara Siemer were first married, they started a fund at their church to, as they said, “give a place to those who had no place to go.” This giving spirit that existed in their earliest days together eventually led to devoting themselves to improving the lives of children across the country.

Children have always been at the center of Barbara Siemer’s work. As a school teacher impacting children’s lives on a daily basis, Barbara grew keenly aware of the effect that a stable home had on her students. When families experienced homelessness or eviction, it led to what Barbara called “school instability” and negatively affected student performance in school. Al would lead the charge to help put Barbara’s ideas into action, using the entrepreneurial spirit and uncommon ability to think outside the box that led him to found the international Desco Corporation, headquartered here in New Albany.

The Siemers call both New Albany and Sarasota, Florida home. It was in Sarasota in 2003 that Barbara approached the United Way about developing a program to address school mobility challenges experienced by her students and other children. The United Way embraced Barbara’s idea. Moreover, Barbara and Al’s gift to support the program inspired others to give and help make long-lasting changes impacting at-risk children and families. In its first year alone, 97 families averted homelessness, keeping 147 children in school, and the following year numbers doubled.

The Siemers learned along the way that it is substantially less expensive for a community to intervene and prevent a family from becoming homeless than it was to address their needs once they have crossed the threshold into homelessness. In 2007, the Siemers brought their Sarasota success story to the United Way of Central Ohio with designs to extend the reach of their program. Since every community is different, the program was tailored by local communities to address the needs of the residents.

In 2011, the Siemers took the first step toward nationalizing their program by launching the Siemer Institute for Family Stability with the single largest private gift to date to the United Way of Central Ohio. Since its inception and the creation of its headquarters in Columbus, the Institute has benefitted 30,000 families and 60,000 children across the country by improving family financial and housing stability while creating opportunities for families to thrive and for students to achieve academic success. In 2012, the Siemers were recognized for their work and presented with the United Way National Tocqueville Society Award by United Way Worldwide.

Reflecting on the creation of the Siemer Institute, Barbara and Al have said, “We know that keeping families stable and in their homes has a large positive effect on helping their kids succeed in school. The family stability initiatives we have invested in are effective ways of addressing this crucial issue, and we are confident that the Institute can use the expertise and relationships of the United Way system to truly make this a national model.”

The Siemers have a positive effect on every community they touch, and New Albany is no exception. As longtime, annual Premier Patrons of The New Albany Community Foundation, with Barbara serving on the Foundation board for nine years with one as its chair, the Siemers have played an instrumental role in shaping several transformational projects such as the Jeanne B. McCoy Community Center for the Arts, the New Albany branch library and more.
The Siemers and their initiatives reflect a generosity, caring for others and an abiding desire to give back. “Barbara and Al Siemer embody the true spirit of community that we aspire to in New Albany,” said Foundation President Craig Mohre. “Understanding that their time, talent and treasure can positively impact individuals, families and the greater community, the Siemers have lived the example so beautifully modeled by the McCoys and for which this Award was created to honor.”