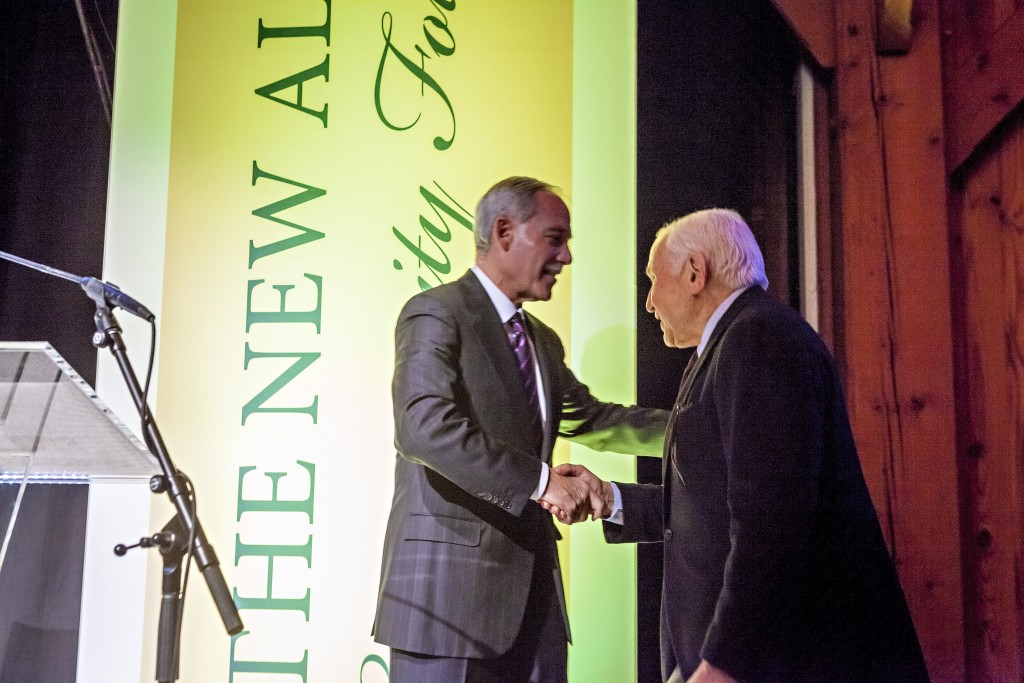 “Before I announce this year’s McCoy honoree I’d like to just take a few moments to share a few things with you about this special place, our community, New Albany. It occurs to me how fortunate we are to be here tonight and celebrate so many extraordinary accomplishments. Let me list a few. The great work of The New Albany Community Foundation on so many fronts, including the success of raising as Craig just shared, over $25 million dollars from this Remarkable Evening event in just 16 years. There’s no other city in Ohio that can make that claim. Our guests from afar tonight I’m sure can attest to the fact that there are few if any places in our country that can match that accomplishment.

Craig mentioned The Jefferson Series. It’s a best in class speaker series that has touched and impacted the lives of more than 12,000 central Ohio students. I don’t know about you all but when I was in school I didn’t get to meet with Condi Rice, Chris Matthews, and folks like that. Think about how that may have impacted you. Most recently, The Jefferson Series was broadcast worldwide on CNN with an audience of over 25 million people. That speaker series is unique. It focuses on the most important issues of our time: national security, mental health, the first amendment, civil discourse.

We all know about the beautiful Kessler Library, the McCoy Center for the Arts, these are true, true community jewels. And there’s so much more. But, what’s most remarkable to me, if I could use the word remarkable, is how this all happened and the fact that it’s really happened in such a short period of time. I’m from Columbus and in 1990 none of this existed. Not this barn, not the community, not the McCoy Center, not the Charlotte Kessler Library, not the white fences, not any of it. I remember it well. New Albany as we now know it then was nothing more than a dream. It was an idea.

As a national home builder based here in Columbus, Ohio, our company, led by my dad, was intrigued and excited when we had learned that Les Wexner and Jack Kessler were going to plan a major development, New Albany. When we learned even more and found out that there could potentially be several thousand homes, we got really excited. Our business is largely about building and selling homes in case you didn’t know. We knew it would be good because of Les’ involvement, his pure reputation, and his passion for excellence.

It didn’t, however, take that many years for us to soon realize that there was a greater vision for New Albany. Les’ vision. A vision for reinventing the American suburb, both inside and out. By looking back to Thomas Jefferson for inspiration, by turning a local public school system into what has now become an adorning community asset, by building a community foundation, this Foundation, along with a central library, a performing arts center, a center for community wellness. And in so doing, creating a community not just with houses, not just with white fences, but a community with heart and soul, and a community with values that cares about its people and their quality of life.

Les, one thing I know for sure, none, zero of this would’ve happened without you. As I said this is your vision. With your relentless focus, you have found a way like no other to harness this development for the greater good. New Albany is a reflection of and personifies Les Wexner’s uncommon commitment to lifelong learning, leadership, and an informed citizenry. For all of this we thank you. And for all of this, it is my proud honor to announce that tonight, Leslie H. Wexner is the 2018 recipient of the Jeanne and John G. McCoy Community Service Award.”